Is civil discourse a thing of the past? 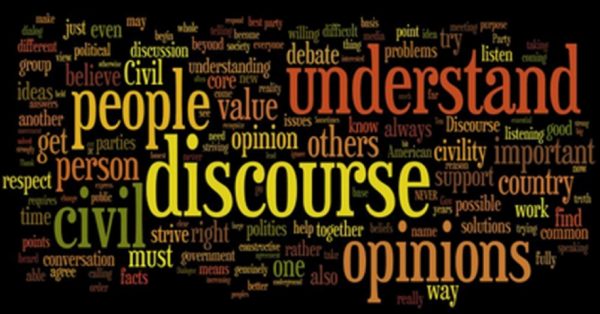 In today’s increasingly polarized society, it often feels that civil discourse is a thing of the past. We don’t talk to each other; we yell at and over one another. It has only served to further divide us, and has helped opened the door to fear of the other, and to disinterest in, or downright hatred of, our fellow human beings.

In one of the more severe manifestations of that, last month white supremacists, neo-Nazis, KKK members, and segregationists marched with torches, body armor, shields and swastikas in Charlottesville. It made my stomach turn. Those were not patriots. They are repugnant and violate every principle I fought for in the Marine Corps and since I took off the uniform.

It also steeled me. Charlottesville — and the rising hatred and division in our country today — is a clarion call to action to continue the tireless work of citizenship. I searched for words that would comfort and inspire, and I was drawn to the speech Secretary of Defense James Mattis delivered at West Point back in May. He addressed the graduates with a simple theme: Hold the Line.

You Hold the Line: true to honor, living by a moral code regardless of who is watching, knowing that honor is what we give ourselves for a life of meaning…

So fight—So fight for our ideals and our sacred things; incite in others respect and love for our country and our fellow Americans; and leave this country greater and more beautiful than you inherited it, for that is the duty of every generation.

We have a responsibility, as citizens, to engage with our fellow Americans and remind them who we are. That we cherish the Constitution of the United States and the rights it guarantees. That we insist that our leaders govern within the limits of the law. That they demonstrate integrity and honor and work for the common good. That we judge women and men by what they do, not who they are, the color of their skin, their faith, the place they were born, or who they love.

It is with these thoughts in mind that I should note how much I’m looking forward to attending the second annual First Amendment Voice Own Your Liberty National Symposium. They invigorate me – a group of citizens committed to civil engagement and solving problems facing our communities.

This, I believe, is what our founding fathers were searching for when they wrote the first amendment. That within the United States, there is room enough for all peoples. Everyone may express themselves fully, come together, or disagree with each other and their government, and we will still be one nation, brought together by a set of values and ideals, chief among them the freedom to express oneself, to assemble, and to worship.

Those who marched with torches in Charlottesville go against everything that the United States for, and the freedoms and values it represents. We owe them nothing. But, especially as military veterans who have sworn to uphold the Constitution, we do owe it to the rest of our fellow citizens to ensure they can fully exercise their freedoms. To do that, we must have those civil, and sometimes difficult, conversations. We must exercise our own voices and come together. We must reach across the aisle and find ways to work together toward the common good, and toward the more perfect realization of our nation’s most cherished ideals.