The power of invitational communication in political dialogues 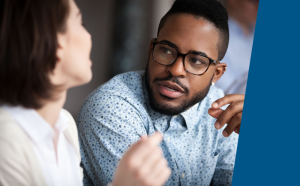 When talking about politics and other controversial conversational areas with someone who has different beliefs than you, do you feel as though they’re listening to understand what you’re saying or simply listening and waiting for their chance to respond? More importantly, are you genuinely listening or are you listening just long enough for them to stop talking so you can bring up your own points?

An ongoing problem in everyday discourse about politics is the prevalence of defensive listening, where we feel like we must defend our viewpoints whenever they face opposition, rather than authentically engaging with another person through critical, meaningful dialogue. Given the widespread incivility and even downright hostility we’ve witnessed in both public and private conversations, how can we hope to overcome our divisions if we can’t first agree on how to properly communicate with those who have differing viewpoints?

This question is what brings us to a concept called “invitational communication” (or rhetoric, as it’s commonly referred to in academic literature). It was developed by Sonja K. Foss and Cindy L. Griffin in 1995, and it refers to the idea that we don’t always need to concern ourselves with persuading others so much as gaining an understanding of others’ perspectives. It seems simple enough but it’s enormously challenging to actually put into practice.

If you’re tired of having unproductive political arguments with friends, colleagues or family members, then incorporating the three principles of invitational communication – equality, immanent value and self-determination – could help you overcome differences of beliefs and facilitate more constructive, inclusive conversations.

When it comes to talking about politics or pretty much any major societal event nowadays, things can get heated pretty quickly if conversation participants aren’t consistently mindful of their internal reactions (mental or physiological) and external responses (both words and actions).

Problems typically arise when conversation participants view the dialogue in a win-loss frame in which they must defend their viewpoints against any critique. This denies the possibility for mutual understanding or genuine reflection because the parties involved are too focused on “winning” an argument.

Invitational communication seeks to resolve this issue by viewing people as equal participants who each deserve an opportunity to speak without interruption or attack. When you view your dialogue partner(s) as equal from the start – and listen to them just as you’d like for them to listen to you – you’ll be in a much better position to thoughtfully engage with them and they’ll be more likely to reciprocate the respectful treatment.

Immanent value refers to the notion that each person in a conversation has uniquely valuable knowledge and experiences to contribute. Problems in conversations concerning politics tend to crop up when one or multiple parties denigrate each other’s perspectives by either questioning their credibility beyond what is reasonable or dismissing their credibility altogether.

For example, we can see this in contemporary discourses between members of different generations. Over the past few years, older folks have been increasingly dismissed with statements like “okay boomer,” while younger folks’ valid concerns or critical questions are mocked by those who claim that Millennials and Gen Z’ers are “too young” or “too naive” to understand reality.

From an invitational communication perspective, instances of intergenerational conflict could be better-handled if all sides first took time to inwardly reflect on their preconceived notions and biases, then acknowledge they could learn something from listening to someone with different viewpoints. It’s not easy for most of us to immediately accept that vastly different perspectives could offer value to a conversation, but it’s arguably one of the most important first steps towards building better dialogues.

This final aspect of invitational communication concerns individuals’ autonomy to make their own decisions and live their lives how they want. Even the most persuasive speakers can’t convince everyone to adopt their perspectives, and there’s nothing wrong with having conversations where both parties leave without reaching an agreement. In other words, it’s okay to “agree to disagree.”

Invitational communication posits that people shouldn’t try to impose their beliefs on others, but rather invite them to have a conversation in which everyone involved has a relatively equal opportunity to participate and articulate their own views. The critical thing to note here is that you can’t extend an invitation then fall back into “listening to respond” (i.e. waiting for your turn to speak instead of thoughtfully considering what they’re saying and engaging with their points before moving onto your own).

While invitational communication isn’t a perfect solution to overcoming political divides among us, it’s nevertheless an ideal tool for improving the quality of not just your conversations but also your own listening skills in what could otherwise become heated conversations.