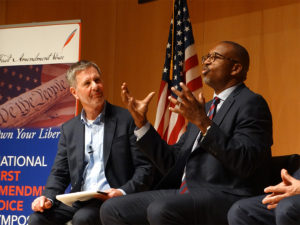 Many FAV supporters had the privilege of interacting with experts from the first amendment space in Philadelphia during our national Symposium, in addition to meeting lots of people interested in civil discourse. After Dr. Wilson Goode, the first African American Mayor of Philadelphia, provided a thought provoking keynote address, the opening plenary panelists explored the contours of first amendment trends on college campuses, in the media, and through the lenses of technology and social media. These nonpartisan experts agreed that America’s current state of political polarization could not be addressed with technological fixes or government involvement. They concluded that we as citizens needed to develop political and social paths forward to resolve some of the most vexing challenges facing our country. So, how do we do that?

After our breakout trainers provided tools for civic engagement, Kern Beare, Founder of Pop the Bubble, demonstrated how to engage in a “Difficult Conversation,” and Janessa Gans Wilder, Founder and Executive Director of the Euphrates Institute, led students on a journey of self-exploration to determine what in their personal stories shaped their current perspectives of the world. Following the Symposium, Kern led several Difficult Conversation workshops in the DMV area, including Capitol Hill on September 18th, Frederick, Maryland on September 27th, and Arlington, Virginia on September 28th. We seem to have a thirst for understanding how to bridge divides in our society. The partisan rhetoric alienates many people from wanting to engage in the public square. However, when we host events that establish norms of first seeking to understand andlisten, people tend to be willing to take the risk of venturing forth.

FAV will continue to collaborate in this space and is currently in discussions with strategic partners to bring our programming to the west coast. Don’t worry, we’ll return to Philly and DC, as well. Look for more opportunities to experience meaningful dialogue around sensitive issues like the conversation we hosted in Philadelphia. Kern moderated a discussion on the NFL Kneeling issue between Reverent Michel Faulkner, a former Jets Defensive Lineman, Scott Cooper, a retired Marine officer, and Mr. Alan Inman, a decade’s long leader and organizer in African American communities and Senior Advisor to the Global Peace Foundation. Speakers demonstrated civility to each other, as well as, audience members who asked questions or contributed to the discussion. Stay tuned for similar programming in future FAV events! The experience can be uplifting and contribute to healing some of the divisions within our present discourse.

Please forward this newsletter to friends and colleagues you think would appreciate FAV’s work. Subscribe here.

Steve Miska and the FAV Team