‘Cancel Culture’ and the First Amendment 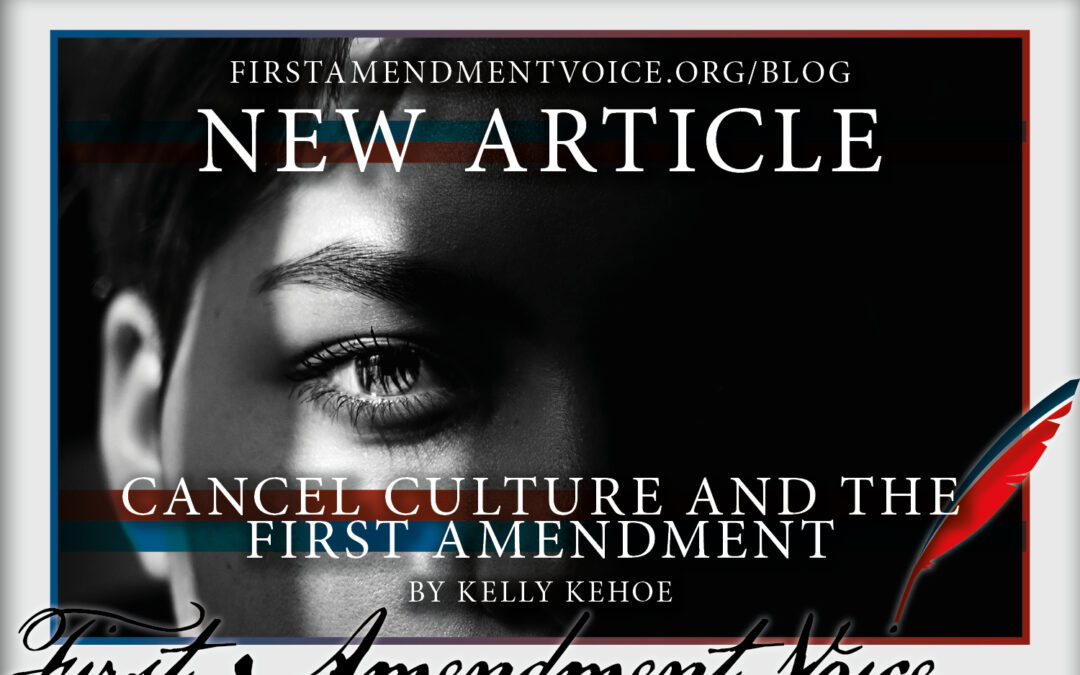 As the Freedom Forum Institute points out, the First Amendment protects freedom of speech but not without some key exceptions, such as obscenity, defamation, blackmail, and perjury. With this in mind, it would be reasonable to view cancel culture as a multifaceted issue that cannot be clearly divided into two categories of “always good” or “always bad.” The issue is that sweeping generalizations in favor or against cancel culture – often in the form of brief, emotionally charged social media posts or polarizing rants from news commentators – tend to distort what could have been constructive conversations about what someone did, why it might be interpreted as offensive, and how common ground may be achieved.

To better understand what cancel culture is, why it has become such a prominent issue in the U.S. and what the potential/actual consequences are, let’s explore how this controversial concept is typically understood by others and how it relates to the First Amendment.

What is Cancel Culture?

Similar to other hyper-politicized phrases like “fake news” or even “essential workers,” there is no clear definition of what exactly “cancel culture” refers to. There are countless articles analyzing what it is, how people leverage the term in social media discourses to silence dissent or demand accountability, and what the positive/negative implications of cancel culture may be, but as of 2021, we have yet to come to a common understanding of what cancel culture means and whether it’s more of a beneficial or harmful thing for free speech.

In one such article arguing that cancel culture does not actually exist, The New Statesman describes cancel culture as “a mob mentality, a series of mass movements seeking to end the careers of public figures whose thoughts or opinions deviate from a new set of left-wing norms.”

If there’s not a readily agreed-upon definition of “cancel culture,” what influences different individuals’ and groups’ understanding of the term?

An in-depth study from the Pew Research Center in 2021 found that roughly 44% of the American population has heard of “cancel culture” and, perhaps unsurprisingly, individuals’ interpretations of cancel culture varied by political affiliation as indicated in this graph:

Pew Research Center bears no responsibility for the analyses or interpretations of the data presented here. The opinions expressed herein, including any implications for policy, are those of the author and not of Pew Research Center.

The aforementioned Pew Research study is well worth dedicating some time to read through yourself. It quotes several different perspectives on cancel culture and analyzes the most common rationales of those who believe cancel culture unjustly punishes people (e.g., context considerations, people are overreacting, “offensive” is a subjective concept) and those who believe cancel culture is important for holding others accountable (e.g., people should be more mindful of the consequences of what they say and social problems like racism, sexism and homophobia are brought to light).

To recap what we’ve covered so far: there’s no singular definition of “cancel culture,” and there’s little agreement among even politically-similar individuals/groups as to whether cancel culture poses more advantages or disadvantages, though it’s generally agreed that it poses some implications for freedom of speech.

The aforementioned article from The New Statesmen pointed out how in spite of public hysteria surrounding cancel culture, it “rarely has real-world consequences: instead, it might result in names trending, take-down threads, and more replies to a tweet than likes.”

When former President Trump was banned from Facebook and Twitter in January 2021, the Internet was in an uproar over whether such actions were part of a larger cancel culture movement or simply another instance of non-governmental entities (in this case, publicly-traded corporations) denying access to their platforms to those in violation of their terms of service. Ten months later in October, the former president launched his own social media platform called TRUTH Social, which presented some interesting implications for current discourses about cancel culture.

On the one hand, getting “cancelled” (banned from traditional social media platforms, in the case of former President Trump) makes it more challenging for these individuals to maintain the same level of public visibility as they enjoyed previously. On the other hand, the trend of well-known “cancelled” people making successful comebacks into public life suggests the consequences are not nearly as dire or permanent as the fear appeals embedded in anti-cancel culture rhetoric make them seem.

Concerns over the potential consequences of cancel culture aren’t limited to social media, of course. At the 2020 Republican National Convention, one delegate resolution explicitly cited cancel culture as a threat to First Amendment freedoms, stating that it has “​​grown into erasing of history, encouraging lawlessness, muting citizens, and violating free exchange of ideas, thoughts, and speech.”

In February 2021, a state senator in California introduced two bills that would prevent employers, landlords, banks, and educational institutions from discriminating against individuals on the basis of political ideology. Melissa Melendez, a Republican, described her proposal as an effort to combat “cancel culture and the efforts to silence differing opinions and voices.” The senator did not provide examples or data to support the common claim that people have been denied goods or services on the basis of their political affiliations or beliefs, but perceptions of cancel culture remain potent in American political discourse nonetheless.

But what about everyday individuals without the wealth or name recognition that people like former President Trump, Dave Chappelle, Louis CK, Gina Carano, Roseanne Barr (to name a few) have?

There’s a case to be made for individuals who may be unjustifiably “cancelled” by mob mentalities that sometimes run rampant on social media. What if someone said something deemed offensive without realizing it may be interpreted as such? What if they meant no harm and genuinely apologized after reflecting on how their words may be deeply hurtful to others? Who decides what type of cancellation is appropriate for certain words or actions, assuming cancellation is a justifiable response at all?

These are some of the many difficult questions we must consider when thinking and talking about cancel culture. On social media, debates over cancel culture are frequently laced with anger-laden words and phrases and cherry-picked examples to support “their side” of the issue, but these discussions rarely make room for thoughtful deliberation or genuine attempts to listen to alternative viewpoints.

Social media and freedom of speech enshrined in the First Amendment permit us to openly publish our thoughts and feelings to global audiences on a 24/7 basis. If a queer liberal activist spends hours on Twitter denouncing Dave Chappelle for being pro-TERF (“trans-exclusionary radical feminism”) in his latest standup special, then they are free to do so. On the flip side, if a conservative Californian wants to spend hours on Facebook venting about Governor Newsom, then they are also free to do so.

It would be a false equivalence to say that critiquing someone – especially if they’re a public figure with influence over millions of people – is the same thing as “cancelling” them (and, as mentioned previously, cancelling typically doesn’t lead to significant consequences anyway; Dave Chappelle is actively touring with large, sold-out shows and the recall effort against Governor Newsom was unsuccessful).

However, just because we can do something doesn’t mean we always should. It ultimately comes down to a question of what you deem a worthy use of your time: posting and consuming rage-filled content that reinforces destructive “us” versus “them” divides? Or perhaps it would be a better use of time and emotional energy to pause when we encounter emotionally-charged content online and thoughtfully consider the consequences of engaging with or sharing such content.

Individuals alone don’t have enough power to combat divisions in our country, especially when it involves a vague, undefinable yet influential phenomenon like cancel culture. However, by being willing to listen to others’ perspectives, recognizing which of the infinite social media battles are worthy of your time, and using your First Amendment-given right to speak freely in ways that heal rather than divide, we can collectively reach a point where the only thing to be cancelled is cancel culture itself.