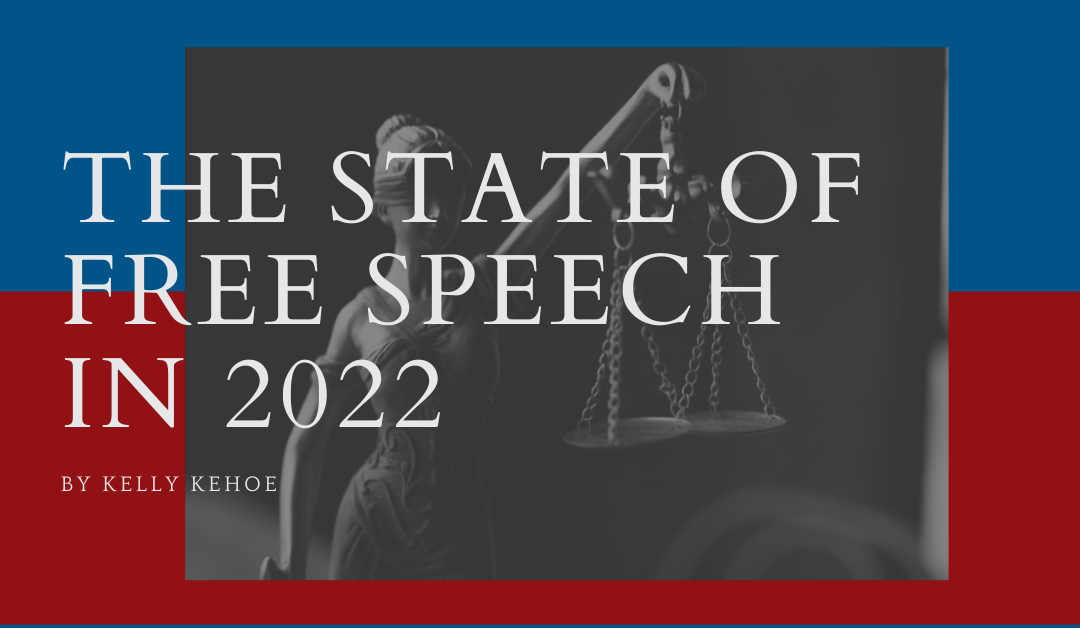 Happy New Year, First Amendment Voice blog readers! The year 2021 was quite a rollercoaster of a sequel to 2020, and 2022 is looking like another action-packed year with the ongoing global pandemic, several major cases on the Supreme Court’s docket, the upcoming Olympics in China, and the November midterm elections, to name a few. The First Amendment’s role in our lives continues to evolve year after year, and there are some intriguing possibilities on the horizon in regards to freedom of speech specifically. In this post, we’ll explore three free speech cases that will be decided by the Supreme Court this year, in addition to the latest research on Americans’ perceptions and feelings about the state of freedom of speech in the U.S. What’s on the Supreme Court’s Docket This Spring? The Supreme Court will review four cases related to the First Amendment in its 2021/2022 session, which began in October of last year. Those cases include: Three of the above cases relate to freedom of speech, while Shurtleff v. Boston primarily concerns religious freedom (whether a city is violating a private religious group’s First Amendment rights by refusing to fly their flag on the city’s flagpole). Egbert v. Boule will determine whether plaintiffs can sue federal officers for First Amendment retaliation while performing their job duties (in this case specifically, a U.S. Customs and Border Patrol agent was involved). The Federal Election Commission v. Ted Cruz for Senate will determine whether Section 304 of the Bipartisan Campaign Reform Act poses an unjustified burden for political speech. Finally, Houston Community College System v. Wilson will determine whether an elected body (in this case, the Board of Trustees for the HCC system) has the authority to censure a member in response to their speech. Knight Foundation’s ‘Free Expression in America Post-2020’ Report Knight Foundation and Ipsos recently conducted a survey of 4,000 American adults (including 1,000 undergraduate college students) and released the results in a fascinating report you can access by clicking here. Perhaps unsurprisingly, the study found significant partisan differences concerning what may be considered a legitimate expression of one’s First Amendment rights, particularly in regards to politicized topics like the 2020 election or protests for racial justice. In spite of these differences however, one remarkable highlight was that respondents ranked freedom of speech as one of the most important rights to Americans

The Knight Foundation’s report contains many more eye-opening findings about freedom of speech in the U.S., so it’s well worth exploring further on your own by clicking the link above. Morning Consult: More Regulations for Social Media in 2022? Research from the international data intelligence firm Morning Consult indicates there may be greater emphasis from lawmakers on regulating social media companies this year. Morning Consult’s December 2021 poll found 56% of U.S. adults are in favor of the government regulating social media companies in some way; when partisan affiliations were taken into account, 68% of Democrats and 51% of Republicans support the regulation of social media platforms. There are several potential reasons as to why there has been fairly limited government regulation of sites like Facebook, Instagram, Youtube, Twitter, Reddit and others. For one, the tech industry evolves at an incredibly fast pace, while Congress is comparatively sluggish at proposing and enacting legislation to keep up with new technological developments. Additionally, younger generations tend to be more tech-savvy than their elders, but the average age of members in the 117th Congress is 58.4 years for House Representatives and 64.3 years for Senators (the eldest members in each chamber of Congress are both 87 years old). Social media companies and the tech industry in general are also astoundingly complex. As we explored in the First Amendment Voice white paper, “Pandemic of Polarization” (which you can access by clicking here), social media companies are uniquely designed to be addictive for users. Consequently, the lack of government regulation enables them to leverage ethically questionable means of attracting and captivating hundreds of millions of users worldwide, while our offline lives continue to be negatively impacted by the misinformation and polarization radiating from these platforms. Fortunately, the regulation of social media companies appears to be at least a somewhat bipartisan issue, which means there’s hope for meaningful change this year. Until our lawmakers are willing and able to enact policies to mitigate the negative implications of social media, individuals like us can become forces for positive change by developing greater mindfulness about the effects of social media in our own lives, remaining committed to constructive dialogues with those whom we disagree, and spending less time online and more time outside or helping others through fulfilling volunteer opportunities.