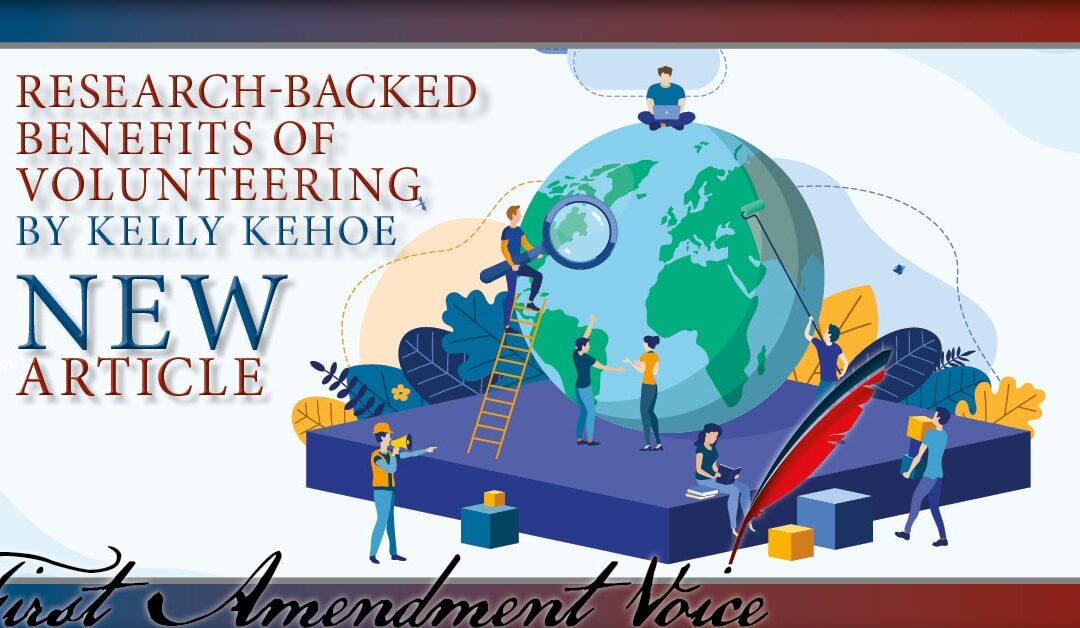 Most of us know that volunteering is essential for meaningful participation in civic life, but did you also know that there are several benefits of volunteering for those who get involved in community service? With the 2022 Edward D. Lowry Memorial Award for Citizenship nominations opening soon at First Amendment Voice, this post will celebrate the rewards of volunteerism and hopefully inspire more folks to get involved in their communities this year.

First things first: have you ever wondered which groups are most likely to participate in volunteer opportunities in the United States? This fascinating report published by AmeriCorps found that the five states with the highest volunteer rates per capita include Utah (#1), Minnesota, Oregon, Iowa and Alaska. The same report found the cities with the highest volunteer rates in the U.S. include Minneapolis (MN – #1), Rochester (NY), Salt Lake City (UT), Milwaukee (WI), and Portland (OR).

Another AmeriCorps report on volunteer demographics found that over 32 million men and 44 million women collectively contribute over 6.9 billion hours of volunteer service. Breaking it down by gender, approximately 26.5% of American men and 33.8% of American women are engaged in volunteering efforts, which included performing tasks for one’s neighborhood, participating in local organizations, and/or donating to charity.

In another study published in The Gerontologist in 2021, researchers found that older adults who volunteer 100 or more hours per year tend to experience more positive self-perceptions of aging and, subsequently, fewer depressive symptoms.

A 2017 study published in the journal Social Science Research found that encouraging volunteerism and civic engagement among youth may lead to multiple positive outcomes, including a greater likelihood of kids getting involved in volunteering later as adults, greater psychological well-being (for those who voluntarily participate in service opportunities), and a correlation between youth volunteering and both years of schooling and income.

Stress-Reduction Benefits for Those Who Care About Other People

An April 2013 study published in Health Psychology found that, for people who hold positive views towards others, getting involved in volunteering can reduce life stress and mortality rates. The second part of the study similarly found that volunteerism was associated with fewer stressful life events and reduced psychological stress among those with high world benevolence beliefs (in other words, they tend to believe other people are more good than bad).

The Edward D. Lowry Memorial Award for Citizenship recognizes the work of nonpartisan volunteers bridging divisions within their communities to promote the public good. Get ready to learn more about the positive work going on in countless communities across the country as FAV lifts up amazing community leaders and civic entrepreneurs who exemplify the following qualities.

• Relentless service to others

• Able to work across ideological differences for the common good

• Overcomes setbacks; strives on in the face of adversity

• Exhibits strategic thinking but able to translate that into results

• Inspirational: encourages others to give of time, talent or resources

Nominations are due by March 1st to [email protected] with email title “2022 FAV Lowry Award Nomination” You can also submit a nomination using the form linked on our home page. Learn more about the Lowry Award on our YouTube page!