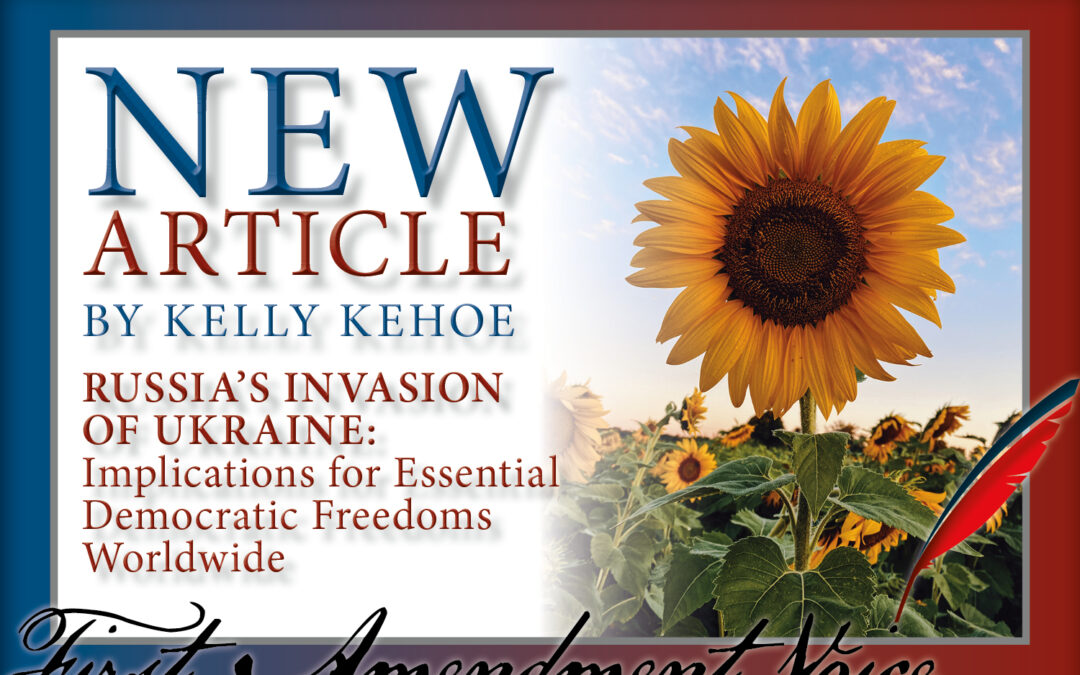 If you’ve watched or read the news lately, then you know it’s next to impossible to check on what’s happening in the world without coming across a story or video about Russia’s recent invasion of Ukraine. As many as 6.5 million Ukrainians have been displaced so far in the conflict, and the brutal suppression of key freedoms like free speech, free press and peaceful assembly goes completely against the principles of democracy.

But amidst the chaos, conflict, uncertainty and tragedy, there is also hope. There have been numerous stories of brave Ukrainians standing their ground, fighting for their independence from Russia in the face of incredible danger. At First Amendment Voice, we believe that these core democratic freedoms are of utmost importance to protect; not just in the U.S. but abroad as well. In this special blog post, we will examine how the freedoms of speech, the press, and assembly have been impacted since the start of Russia’s invasion in Ukraine.

Sunflowers, the Symbols of Resistance: One of the most common symbols of peace in Ukraine’s history is the sunflower, which also represents the unofficial national flower of Ukraine. On February 24 of this year, sunflowers became a widely-recognized symbol of resistance against Russia’s invasion of Ukraine, thanks to a viral video of a Ukrainian woman telling a Russian soldier to “Take these seeds and put them in your pockets, so at least sunflowers will grow when you all lie down here.” Since then, sunflowers have appeared everywhere from emojis and beautiful artwork shared by artists on social media to fundraisers for Ukraine humanitarian aid, like these recent fundraising campaigns in Canada.

How Russia’s Invasion Could Impact Free Expression in Democracies Worldwide: In a fascinating interview with John M. Owen, professor of politics at the University of Virginia, Owen explained how freedom of expression and tolerance of dissenting views are essential ingredients for a healthy democracy. When asked what lessons that Americans and other citizens of democratic countries could learn from the events in Ukraine and Russia, Owen responded:

“Such events drive home to us that individual liberty is a precious achievement that can be taken away or weakened, even in the 21st century….As tensions with Russia mount in our own country, one thing to guard against is the tendency to do, in mirror-image fashion, what Russia is doing – to censor dissent, particularly dissent that favors Russia. Democracies must remain democratic, even under stress.”

Elon Musk Refuses to Block Russian Media from Starlink: Speaking of censorship, Elon Musk has made headlines multiple times during the conflict; at first, for providing Starlink satellite internet access for some parts of Ukraine, and later, for refusing to block Russian state media on the Starlink platform. Musk referred to himself as a “free speech absolutist” when tweeting about the decision, though some sources pointed out that Musk doesn’t seem to have the best track record when it comes to critiques from journalists and his own employees.

Freedom of the Press

Social Media Companies’ Responses to the Russia Invasion of Ukraine: A recent Q&A report from Human Rights Watch conducts an in-depth exploration of the roles in which social media platforms and messaging apps have played in mitigating misinformation about the present conflict. One of the many important findings from HRW’s report stated:

“Since February 24, companies providing social media and messaging services have taken many steps in response to the war in Ukraine, most of them aimed at countering harmful disinformation, adding labels to or blocking state-sponsored or state-affiliated media, or introducing extra safety measures. Some of these measures apply to either Ukraine or Russia, some apply in the EU only, and some apply globally. Some decisions were made in response to government requests, some in defiance of government requests, and others in response to public pressure, or at the companies’ own initiative.”

For more information on global perspectives about social media and disinformation, view HRW’s full-length report linked above and don’t miss this 2021 report from the United Nations as well.

Putin Threatens 15 Years’ Imprisonment for Publishing or Broadcasting “False Information” About the Invasion: A March report from NPR described a new law Putin recently signed that would impose a 15-year prison sentence on those convicted of publishing or broadcasting information deemed “false” by the Russian government. Concerningly, the law outlaws the use of words like “invasion” or “war” in media, which would effectively silence dissent from critics in Russia.

Bravery of Journalists in Conflict Zones: An eye-opening feature from Nieman Reports reviewed several instances of Ukrainian journalists reporting under incredibly challenging and life-threatening circumstances, despite the post-Soviet era instability in press freedoms and severely limited funding that have impacted their work for years. As Nieman Reports pointed out, “The Russian invasion of Ukraine is a powerful reminder of the vital work these journalists and their newsrooms do — and how precarious press freedoms are in the face of aggression from Putin and other authoritarian leaders around the world.”

Global Peace Protests in Support of Ukraine: From the sunflower-adorned BELIEVE sign gathering in Reno, Nevada to the courageous Russians protesting within their own country (and being detained, in many cases), there are countless examples of people coming together to support Ukraine and speak out against Russia’s military invasion. As these photos from Global Citizen demonstrate, people all over the world are engaging in peaceful assembly to call for an end to Russia’s aggressions in Ukraine.

Anti-Protest Crackdowns in Kyrgyzstan: Although the Kyrgyzstani Constitution and Civil Code presumably protect freedom of assembly and protest, the government has recently cracked down on protestors coming together in support of Ukraine. As The Diplomat points out, Kyrgyzstan is reliant on Russia’s economic and security resources, hence the reason why Kyrgyzstani government leaders appear to be striving for neutrality in the present conflict. Since the conflict began, protestors have been subject to fines and even arrested for peacefully protesting, which prompted Human Rights Watch to issue a statement demanding the end of anti-protest restrictions.

Final Thoughts on the Freedoms of Speech, Press and Assembly

As of this moment, we do not know how or when Russia will end its invasion of Ukraine. What we do know is that we must fight harder than ever to preserve our democratic liberties like freedom of speech, freedom of the press, freedom of assembly, and other freedoms enshrined in our First Amendment. Ukraine may be thousands of miles away from the U.S., but it’s clear that these freedoms must be protected and fought for globally.

Want to learn more about the impacts of foreign policy on First Amendment freedoms? Be sure to check out this captivating conversation from First Amendment Voice’s 2020 National Symposium.