Voter Suppression, Voter Fraud: What These Phenomena Mean for Our First Amendment Freedoms 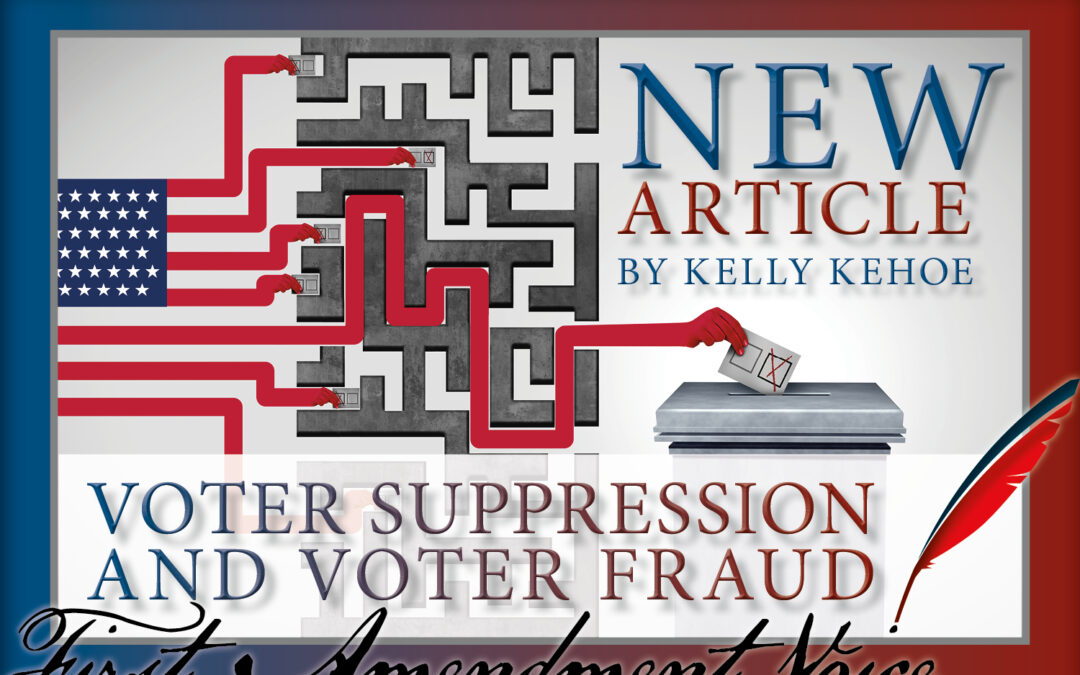 Much of the hyper-polarized rhetoric in the U.S. in recent years has swirled around the issue of voting, such as the Electoral College’s capacity to override the popular vote in deciding the next president, the potential benefits of rank-choice voting, alarm over voter suppression tactics, claims of voter fraud, foreign interference in U.S. elections, and concerns over potential security risks with mail-in voting.

While there have been some attempts to bolster the security of our electoral system – an issue that both major political parties agree is a problem but disagree about the causes – legislation like the For the People Act (HB 1) have struggled to gain enough traction in Congress to actually pass.

So, where do we go from here?

Since voting is an expression of free speech – as explained by legal scholars Armand Derfner and J. Gerald Hebert in their Yale Law and Policy Review article published in June 2016 – First Amendment Voice’s blog post today will focus on some recent research about voter suppression and voter fraud to shed some light on their implications for First Amendment rights as they pertain to voting.

Britannica defines voter suppression as “any legal or extralegal measure or strategy whose purpose or practical effect is to reduce voting, or registering to vote, by members of a targeted racial group, political party, or religious community.”

As the Library of Congress points out, Black Americans have been subjected to the most severe and/or far-reaching voter suppression tactics throughout American history, including poll taxes, literacy tests, intimidation, violence and even the “grandfather clause” that prohibited someone from voting if their grandfather hadn’t voted (which prevented countless descendents of slaves from voting until the Supreme Court struck down the clause in its Guinn v. United States decision in 1915).

Today, voter suppression still exists in various forms, though polarized rhetoric surrounding elections and voting access has led some folks to claim that voter suppression is strictly a thing of the past. On the contrary, as NPR’s Marketplace explored in September 2020, voter suppression persists through stringent voter ID laws, fewer polling places and reduced hours, and greater barriers to vote-by-mail options.

While there has been some debate over whether voter ID laws actually impact eligible voters’ ability to cast ballots, there is substantial evidence to support the argument that voter ID laws do prevent people from exercising their rights to vote. For instance, in the April 2017 edition of The Journal of Politics, an analysis of 50,000+ survey respondents in the Cooperative Congressional Election Study from 2008-2012 found that the implementation of voter ID laws led to significantly reduced turnout among Black, Latino and multiracial voters.

Long distances to polling places can also function as a form of voter suppression, as illustrated by this October 2020 Pew Trusts analysis of polling issues in Halifax County, North Carolina. Elderly individuals, people with physical disabilities, and low-income or homeless individuals disproportionately lack the means to access transportation to the polls, especially in rural areas and on Native American reservations. Consider it this way: if you do not own a car, there’s no public transportation in your area or you can’t afford exorbitant gas prices to drive long distances, how can you exercise your right to vote? This is one of the reasons why vote-by-mail has been heralded as a solution to inadequate polling access (and has been widely available for several years prior to 2020 for members of the military serving overseas and in the state of Oregon).

Meanwhile, 39 U.S. states still have “incompetence” laws in effect that prevent people with certain mental conditions like Down’s Syndrome or schizophrenia from voting altogether. This raises the question: if the First Amendment is intended to apply to everyone in the U.S., should there be a mental competency prerequisite for someone to be eligible for freedom of speech (i.e., the right to vote)?

We’ve heard a lot of claims about voter fraud in recent years, but how significant is this issue, in reality?

The Heritage Foundation – a conservative think-tank based in Washington D.C. – has compiled an Election Fraud Database with proven instances of voter fraud in the U.S. in elections since 1982. While the database isn’t a comprehensive list of all instances of voter fraud that may have occurred, it cites just over 1,350 proven incidents, 1,165 of which led to criminal convictions. Heritage reports the types of voter fraud may include: altering vote counts, ballot petition fraud, buying votes, duplicate voting, overturning elections, false registrations, fraudulent use of absentee ballots, impersonation at the polls, and ineligible voting.

After the 2020 Presidential election, in which former President Trump and some of his supporters alleged that tremendous voter fraud stole the election from Republicans, there remains a great deal of public debate over whether voter fraud is truly as widespread as it’s claimed to be. While it can certainly be challenging to identify and prosecute instances of voter fraud for myriad reasons, an in-depth analysis from Bloomberg Government in July 2021 suggests that voter fraud is not as prevalent as the rhetoric surrounding electoral integrity makes it seem.

In some instances, voter “fraud” was either a misunderstanding due to voters’ confusion or even misreported cases of fraud. For example, Georgia Secretary of State Brad Raffensperger (R) and his team of 22 investigators found that approximately 1,000 people voted through absentee ballots and in-person at the polls for the 2020 election. However, most of those cases involved elderly voters who were confused by the vote-by-mail processes. Raffensperger’s team also found the allegations of “66,000 underage voters” to be false; these were simply 17-year-olds who had lawfully pre-registered to vote but did not cast a ballot in the election. Meanwhile, the claim of more than 10,000 deceased voters participating in the election was also proven false; just two ballots from deceased voters were identified after a rigorous investigation.

As Raffensperger summarized in an interview with Bloomberg Government, “People may not like the results. I understand that—I’m a Republican, I was disappointed, too. But at the end of the day those were the results.”

While there remain concerns over the newness and security of mail-in voting, it’s important to note that the practice of mail-in voting dates back to the Civil War (here’s a fascinating resource on the topic from the MIT Election Data + Science Lab). Furthermore, the article, “Does Voting by Mail Increase Fraud? Estimating the Change in Reported Voter Fraud When States Switch to Elections By Mail” published in the May 2021 edition of the journal of Statistics and Public Policy found no evidence of increased voter fraud risk from vote-by-mail processes.

In a country with over 330 million people like the U.S., it’s enormously difficult to determine the true extent to which voter suppression and fraud are causing problems for both our electoral integrity and First Amendment rights as participants in democratic processes. Perhaps something that most people across the political spectrum can agree on is that we must do more to protect our rights to freedom of speech, of which voting is an integral component.

Some solutions that have been proposed in recent years include: